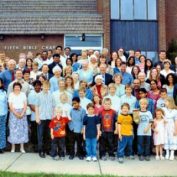 The name Fenton is probably not known by most of the Christians of this generation in Hamilton. Nevertheless, all the assemblies in this highly industrialized area have received from William Fenton a rich spiritual heritage. He and his wife frequently conducted evangelistic services in Gore Park, a beauty spot in the center of the city planned and donated by George Hamilton. Mrs. Fenton had a sweet singing voice with which she attracted the people and Mr. Fenton preached the gospel. It was their usual custom to invite any interested in spiritual matters to come to their home. There they would show them the way of life or teach them the ways of the Lord for His beloved people. One night, a young man, John Carnie, recently arrived from Aberdeen, Scotland, accepted the invitation.

It was soon evident that the guest had a deeper knowledge of the things of God than did his hosts. He taught them ‘church truth’ as he had learned them from God in the Old Land. On June 14, 1874, a few Christians met in the Fenton home to partake of the Lord’s Supper. On the suggestion of John Carnie, two evangelists were invited to come to Hamilton for a special effort in the gospel. Soon, Donald Munro and John Smith arrived and immediately began preaching on street corners and in homes. Later, a hall was rented which was located on the north side of King Street, near MacNab Street.

The tiny assembly that had been meeting in Mr. Fenton’s home eventually moved into a rented hall on King Street West. The saints remained in this location for approximately two years (1874 to 1876). A hall three stories above street level is not the most attractive center for evangelistic efforts. The growth of the assembly and its various activities in the gospel required a more suitable location so the saints became interested in a vacant Baptist Church on MacNab Street. In 1904, the land and building were sold to W. A. Wilson, one of the elders in the Hamilton assembly.

From its inception the MacNab Street Gospel Hall maintained the biblical autonomy of a local church gathered in the name of the Lord Jesus. The elders have always believed that they were responsible only to the risen Head of the church, Christ, and that they had to be submissive to His absolute Lordship.

The Lord’s people soon learned that for the proper functioning and the perpetuation of the testimony, God had fitted two groups of men for administrative purposes and for the ministry of the word of God.

Around 1965 it became necessary for the assembly on MacNab Street to move elsewhere. Spiritual roots had penetrated deeply. There had been so many sacred, precious experiences in that Gospel Hall. The Building Committee was authorized to purchase land on West Fifth Street for $17,500. This amount was already in the Building Fund. Thus, in 1967 the assembly owned land upon which it could eventually build.

With a mortgage from Stewards Foundation the new spacious building was erected, and on Wednesday, March 4, 1970, the assembly took legal possession and regular services commenced in the new West Fifth Chapel on Lord’s Day, March 8, 1970. In the evangelistic meeting that evening Arnot Mclntee of St. Catharines preached the gospel with clarity and power. It was soon apparent that God, who had been with the work in the Gospel Hall, MacNab Street, was still with His beloved people in the Gospel Chapel, 440 West Fifth Street.

Many challenges have been faced over the years but the principles and practices have remained true to His word. In 2004 it was decided to commemorate the 130th anniversary of this continuing fellowship of believers. On Sunday 13th June a memorial service was held prior to the Family Bible Hour. Letters were read from old time members. Alex Grant a very long time member came forward to give his account of the years gone by. After the service a group picture was held outside the Chapel. We shall all remember how good our God is and, if He be not come, we pray that He will continue to bless us.

We're not around right now. But you can send us an email and we'll get back to you, asap.